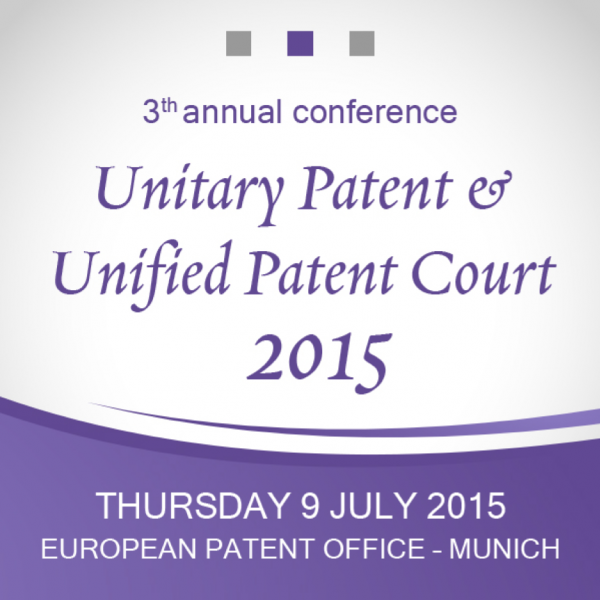 In lights of the ongoing progress in preparing the implementation of the new European patent system, the 3rd edition of our annual UP&UPC 2015 conference will focus on discussing and revealing some interesting news and provide an update on the main unitary patent and court hot topics, such as:

• How is the UPC ratification process going on? Which country will ratify next? What changes and debates are underway within the countries that signed the UPC Agreement in order to prepare for the new system

• When are we going to have an established charter for patent and court fees? Key to any decision whether to request a European patent with unitary effect, and whether or not to opt out of the jurisdiction of the UPC, is going to be the question of fees. Be the first to comment on the new draft of proposals on costs

•The seventeenth draft of the Rules of Procedure was published on 3 November 2014. When are we to expect a finalized ROP ? What changes left to be done?

• What news could the decision makers give us? Overview from EPO Select and Preparatory committees

• Timings of implementations and coming into force. When will the UPC officially open its doors? Would it be ready for business by beginning of 2016/2017? How are we advancing in the workstreams of IT, legal, human resources, facilities and finance? How is the training of judges coming along?

Following two successful editions in 2013 and 2014, the Unitary Patent & Unified Patent Court Conference is being established as an annual premium event and leading conference on the latest advancements in the UP & UPC with high-profile participants from all over Europe and North America.

On Thursday 16 July 2015, the Unitary Patent & Unified Patent Court conference will be held for its third inception, for the first time at the European Patent Office in Munich, Germany.

Do Not Miss the opportunity to take part in the lively debates and benefit from a first hand experience within an exceptional atmosphere during an entire day devoted to patent matters.

RESEARCHED, PRODUCED AND ORGANISED BY

Since 2002, Premier Cercle is a strategic conference producer who builds state-of-the-art events. By addressing issues under a political, strategic and technical focus, the events crafted by Premier Cercle offers a 360° overview of each information topics. Researched as a journalist would do for its own in-depth report, Premier Cercle analyses how to market an information product and promote it while taking care of the organisational details.
Website: https://premiercercle.com

The European Patent Office (EPO) offers inventors a uniform application procedure which enables them to seek patent protection in up to 40 European countries. Supervised by the Administrative Council, the Office is the executive arm of the European Patent Organisation. As the Patent Office for Europe, we support innovation, competitiveness and economic growth across Europe through a commitment to high quality and efficient services delivered under the European Patent Convention.
Website: https://www.epo.org/index.html

Our lawyers have technical backgrounds, and combined with our wealth of experience and practical know-how, it means we grasp issues quickly and without wasting time. We have experience right across the spectrum of IP litigation, gained from acting in cases across a wide range of technologies and industries. This experience ranges from acting in the earliest biotechnology patent cases technically advising on complex telecoms disputes to enforcing trade mark rights against counterfeit goods in the fashion and luxury goods sectors. We have acted in cases involving products as diverse as DNA microarrays, computer software, pharmaceutical blockbusters, petrochemicals, semi-conductors, mobile phones, perfume and razorblades. We have represented clients in the UK Patents Courts, Court of Appeal and the Supreme Court (formerly the House of Lords) and the European Court of Justice. We have assisted in cases before many overseas courts including in continental Europe, Scandinavia, the US, Australia and Japan. We are frequently involved in European Patent Office opposition proceedings and in representing clients in contentious matters before the UK and European trade mark registries.
Website: https://www.powellgilbert.com/home

About The Patent Lawyer Magazine

The Patent Lawyer Magazine is an industry leading publication that focuses exclusively on the trademark industry. Published bi-monthly and available both in hard copy format and online, subscribers can also access the most important global news updates via weekly newsletters. The Patent Lawyer Magazine features articles from top patent professionals around the globe, covering topics including the latest patent law developments, litigation cases, prosecution trials, jurisdictional updates, and more. With articles sourced from industry experts - attorneys, barristers, and in-house counsel members - the Patent Lawyer Magazine puts a stop to generic IP information, allowing you to focus your time reading what interests you.
Website: https://patentlawyermagazine.com/

The World IP Review’s bi-monthly edition is dedicated to the needs of professionals involved in the management and protection of IP assets. It informs and educates IP owners and their international legal counsel and consultants of the latest strategies for managing, protecting and profiting from their increasingly valuable intellectual property. Each issue of the World IP Review’s bi-monthly edition will contain unique interviews with some of the most prominent IP owners and in-house counsel. It will use a combination of articles and case studies to showcase business strategies. In addition, it will review case law and IP legislation worldwide.
Website: https://www.worldipreview.com/

BusinessEurope is the leading advocate for growth and competitiveness at European level, standing up for companies across the continent and campaigning on the issues that most influence their performance. A recognised social partner, we speak for all-sized enterprises in 35 European countries whose national business federations are our direct members.
Website: https://www.businesseurope.eu/