The ECJ judgment Huawei vs. ZTE – with FRAND conditions for rapid agreement on SEPs? 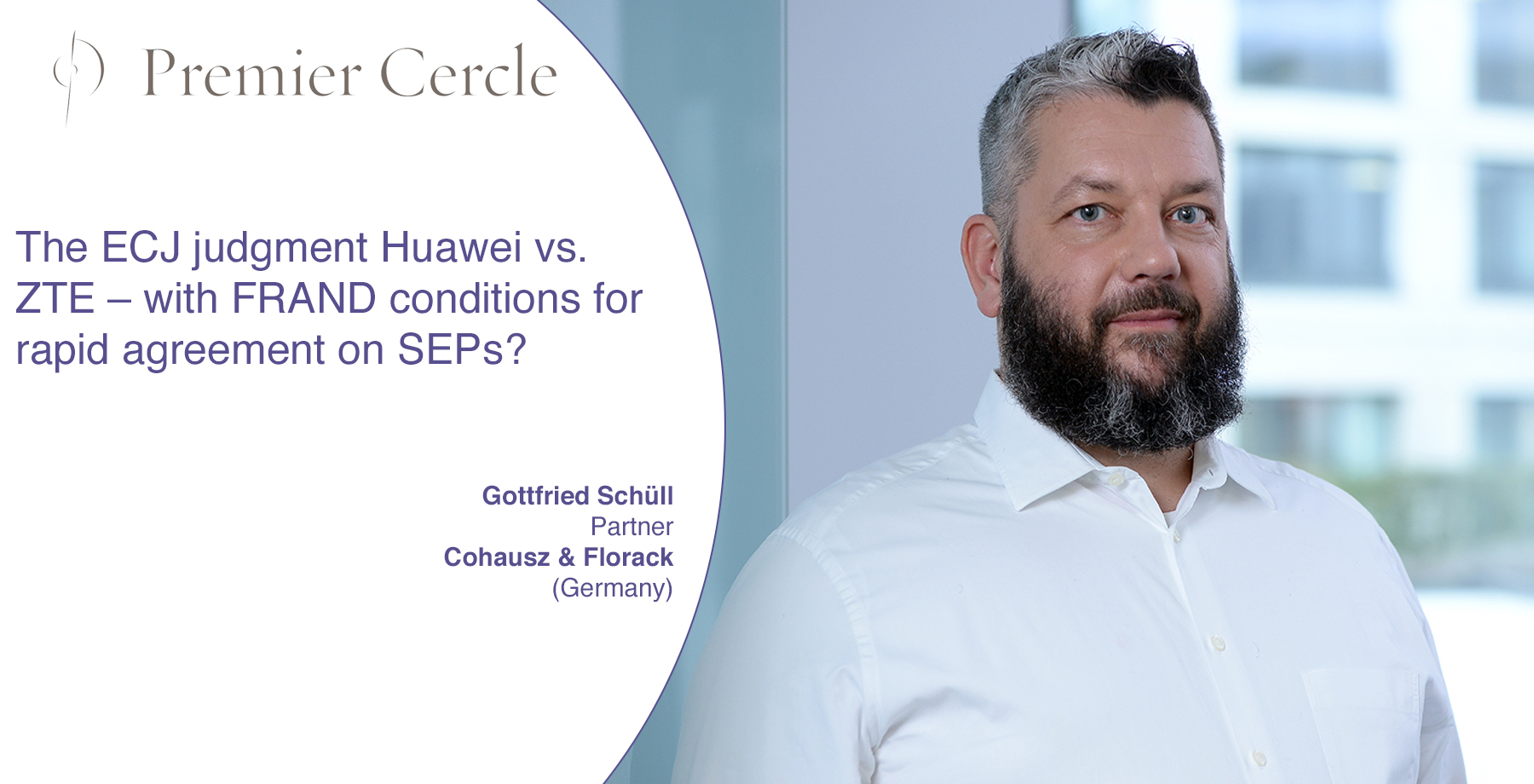 The ECJ judgment Huawei vs. ZTE – with FRAND conditions for rapid agreement on SEPs?

Will the publication of the ECJ ruling Huawei vs. ZTE lead to the expected progress in clarifying the fronts between SEP holders and users of SEPs? In order to be able to answer this, it is necessary to first approach the matter in principle.

What are the effects of a patent?

Among other things, the holder of a patent may prohibit any third party from using the patented invention. This is to reward the owner for having invested time and money in the development of the invention. This injunctive relief is a sharp sword in competition, since it creates a monopoly on the use of the invention for the patent holder. All that remains for the competition is to get by without the invention or to use a – in the case of a good patent – technically or cost-wise disadvantageous solution. Thus, a patent is clearly in conflict with antitrust and competition law, in which monopolies are undesirable. This contradiction is known and desired, since innovations are just as much a prerequisite for a functioning economy in developed economies as is the largely free competition between companies. The monopoly available to the holder of the patent is valid for 20 years and the holder must pay ongoing fees. The patent is carefully examined by the patent offices before it is granted and its validity can be challenged at any time by any third party, e.g. the Federal Patent Court. The infringement of a patent is examined by specialized courts in Germany. This procedure sets comprehensible limits to the exercise of a patent.

What is a standard-essential patent (SEP)?

Today, standards are set in a large number of fields of technology in order to improve the marketability of the corresponding products. One example is technologies for processing video data. Everyone would like to be able to play the video data made available on the Internet or transmitted by television stations on their smartphone or television set. Without unified technology, this would only be possible to a limited extent. This is reminiscent of the times of analog television in which two incompatible systems, PAL and SECAM, were used for the transmission of video data. The development of these and other standards is generally driven by contributions from companies and research institutions in order to jointly provide a suitable technology. A standard is thus set on the basis of the developments of individual participants that are combined within the standardization process. Both the development work and the combination of the developments require considerable expenditure. In order to protect these expenses, the participants can protect the results of their standard-relevant developments by patents, as with independent developments. If these results are then included in the standard within the scope of standardization and if the party has had this development protected as a patent, it is a so-called standard-essential patent (SEP), i.e. a patent which is inevitably used when the standard is applied.

What does FRAND mean?

It follows directly from the described characteristics of an SEP that there is a need for agreement among the participants in a standardization procedure with regard to the subsequent use of the SEPs in the case of a commercial use of the standard. The usual agreement is that rights of use are granted to each other and to third parties in the run-up to the standardization and are to be Fair, Reasonable And Non-Discriminatory (FRAND) under conditions not yet defined in detail. The definition of these FRAND conditions is reserved for a later negotiation process, since the economic framework conditions are not sufficiently foreseeable in advance.

How are FRAND conditions determined?

In the simplest case, FRAND conditions are determined by bringing together as many patent holders as possible, who agree on fees for the use of the patents within the framework of the implementation of the standard and a distribution of the fees to the patent holders. The aim is to license as many users of the standard as possible on uniform terms. This has been repeatedly achieved for standards in the field of video compression, for example. If no such agreement exists, the patent proprietors negotiate individually or in smaller groups about the conditions for the use of SEPs with individual users or groups of users. It is much more difficult to create uniform conditions and it is much harder to reach all users of the standard. This situation is predominantly the case, for example in the field of mobile communications technology.

What does the ECJ judgment Huawei vs. ZTE concern?

The dispute between the parties before the Court of Justice of the European Union concerned the determination by ZTE of FRAND conditions for the use of a Huawei SEP in the field of mobile telephony. The decision presupposes the use of the patent. The ECJ states that, in the case where a patent confers a dominant market position on the patentee, it may possibly constitute an infringement of competition law if the patentee enforces his right to injunctive relief. In other words, the ECJ is concerned with the question of the circumstances under which competition law sets additional limits to the effects of the patent. A very similar question was also the basis of the 2009 Orange Book decision of the Federal Court of Justice, which resulted in the ECJ requiring the parties to adopt a procedure for determining FRAND conditions. If the user of the patent does not comply with these conditions, the owner of the patent can enforce his injunctive relief against the user without restriction. If the owner of the patent does not comply with these conditions, the user of the patent can defend himself against the injunctive relief. A brief summary of the conditions is:

All this must be done without any delaying tactics and the offers must be FRAND.

In the France Brevets vs. HTC proceedings, the Regional Court of Düsseldorf dealt with the question of whether it is sufficient for the applicability of the Huawei vs. ZTE decision that a patent is an SEP. Like the ECJ, the Court concluded that the question of restricting the right to injunctive relief depends on the dominant position which the patent confers on its proprietor. The specific case concerned the use of a standardized method of communication over very short distances in mobile telephones, which has not established itself in the market in such a way that it was possible to speak of market dominance. In a case Sisvel vs. Haier, the Higher Regional Court of Düsseldorf decided under which circumstances FRAND conditions can be derived for other users from a plurality of agreements concluded between the patent holder and users of the patent. Recent publications emphasize that the ECJ expressly pointed out in Huawei vs. ZTE that the established conditions apply if the patent owner has not yet submitted an offer in a manner accessible to the user. An example that is given of an offer is a draft license agreement that is available to everyone. If this is the case, the decision Huawei vs. ZTE differs only slightly from the Orange Book decision. In the UK, the High Court London dealt with the economic determination of FRAND conditions in its decision Unwired Planet vs. Huawei. The decision was initially welcomed and later clearly criticized.

Courts cannot replace a lack of agreement between owner and user of the patent on what FRAND terms are. The decision Huawei vs. ZTE will not change this. It is up to the patent holders to ensure broad acceptance of terms of use in the run-up to a broad use of a technical standard. If this is the case, reasonable users will not shut themselves off and not-so-reasonable users will follow the latter at some point. Until then, many exciting questions remain unanswered.

The ECJ decision Huawei vs. ZTE is the guideline for FRAND discussions in current SEP lawsuits.